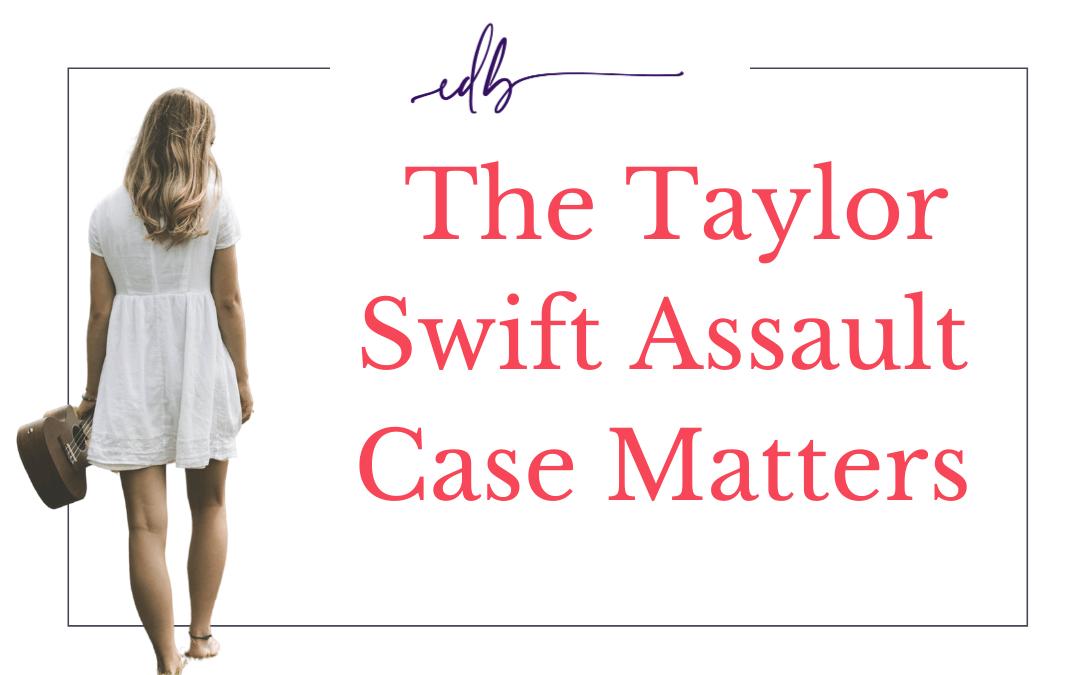 I wouldn’t consider myself a Taylor Swift fan, however, Miss Americana is a must-watch in my book. In Miss Americana  Taylor Swift goes from candidly talking about body image and seeking external validation to her sexual assault case. Taylor shares an unrestricted look into her experiences without veiling her emotions behind lyrics, and I am here for all of it.

Taylor highlights both the plight of staying relevant while not being taken seriously as both an artist and a businesswoman, as well as the blaming and shaming that happens to women when they report sexual assault.  With over 10 years as a Deputy District Attorney, I worked with more victims of crime than I can count. Victims of sexually violent crimes and fraud crimes suffered a different type of shame than victims of violent crimes. They often blame themselves, wondering if they should have done something different, or should have prevented what happened in some way. Often there is also a feeling of shock that the thing even happened.  In both fraud crimes and sexual assault, the perpetrator is the one who made the decision to cross that line, it is not the victim’s fault.

From Harvey Weinstein to Taylor Swift

Taylor Swift talking about her experience highlights how prevalent negativity towards victims is. The Harvey Weinstein trial highlights how much backlash victims can face.  In an interview with The Daily Podcast, one of Harvey Weinstein’s Attorneys  Donna Rotunn was asked if she had ever been a victim of sexual assault and she stated “I have not because I would never put myself in that position,” she said. “I’ve always made choices from college-age on where I never drank too much. I never went home with someone that I didn’t know. I just never put myself in any vulnerable circumstances ever.” This attitude that women somehow ‘put themselves’ in the position to be assaulted is horse shit.

Taylor Swift was assaulted while she was at work. In 2013 she was at a meet and greet before a concert when a Radio DJ waiting to take a picture with her, in her words, grabbed a handful of ass.  She immediately told her security team, the radio station was informed and the DJ lost his job two days after the ass grab incident. It seems that Taylor Swift seemed to keep this incident quiet and out of the media. Then in 2015, the radio DJ sued Taylor Swift for Defamation requesting 3 Million in damages, Taylor countersued for the assault for a symbolic dollar.

The trial wrapped up in 2017 with the Judge dismissing the defamation case, because it was bullshit, and the jury found in favor of Taylor Swift with regard to the assault. In Miss Americana Taylor talks about how it felt to be believed, and how in an incident with multiple witnesses and a photograph when it happened Taylor wondered out loud what happens to women who are raped or assaulted in private when it’s just their word against their attacker. She isn’t wrong…it is hard for victims to preserver through the criminal justice system.
What I appreciate about Swift is how open she was in interviews after the trial about the process and how she pulled back the curtain on her experience in Miss Americana. During the trial the DJ  testified that the experience following this accusation of the assault was “humiliating” for him and that  “it cost me my career, the thing I love to do, my passion”. Here is what I love, Swift wasn’t having it and said, “I’m being blamed for the unfortunate events of his life that are a product of his decisions, not mine.” I hope that every person who has ever been made to feel small, to feel shame, to blame themselves for someone else decisions find strength in those words.

If you want to hear more on the Taylor Swift Sexual Assault trial and Miss American be sure to catch Episode 19 of the Get Legit Law & Sh!t podcast.