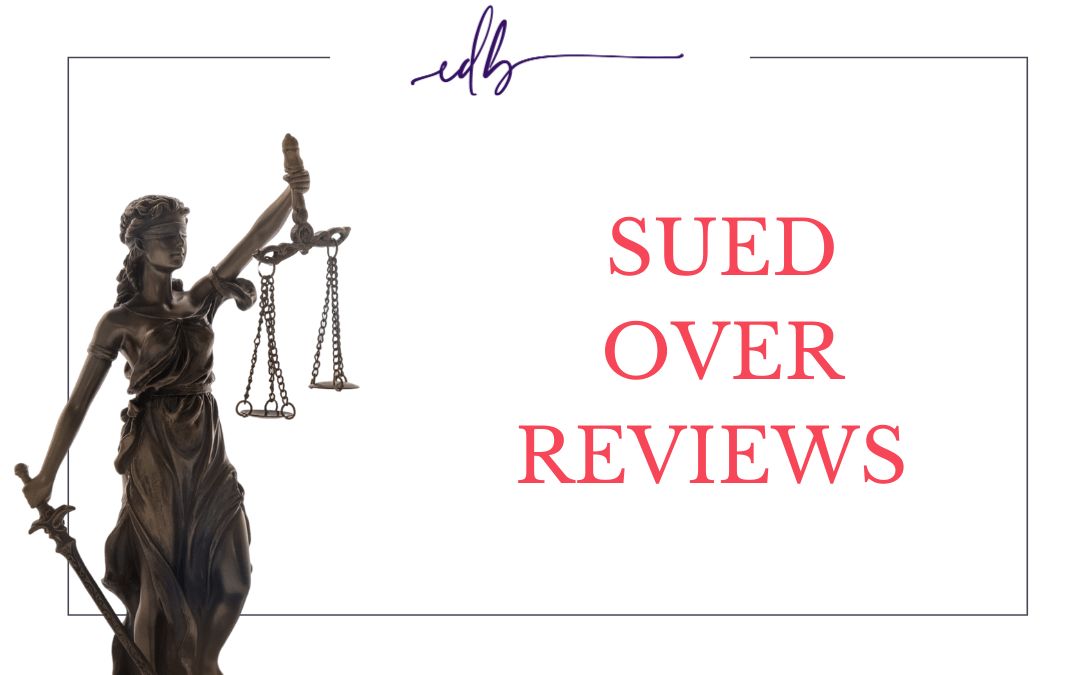 You can get sued over bad yelp reviews.

If you don’t know this is a thing, let’s talk about getting sued over negative reviews. We aren’t talking reviews like in the Sunday Riley FTC settlements, where the company was leaving fake positive reviews for themselves. Here we are dealing with consumers getting sued for leaving negative reviews on sites like Yelp, Trip Advisor and others. This has become such an issue that the Federal Trade Commission stepped in.

Getting Sued for a Negative Yelp Review

Tom Loyd is a Flordia man who was sued by the Deland Animal Hospital for leaving a negative Yelp review.  Mr. Loyd told news sources that his dog suddenly fell ill and he rushed him to the Animal Hospital for a ruptured spleen requiring emergency surgery.  He was told the surgery would be done immediately. However, six hours later the Hospital called and told him to pick up his dog because they were unable to find a surgeon. When he got his dog to the next clinic they told him that it had been too long since the rupture and that the dog would need to be put down.

Tom left the following review on Yelp according to an article on CBS News “The staff had wasted six hours of Rembrandt’s life and destroyed whatever chance he may have had to live. Our Rembrandt deserved a better last day.” Look, I don’t disagree with Tom. His review isn’t slanderous, it isn’t even particularly mean. But that didn’t matter to the Deland Animal Hospital, who sued Tom over the review.

How can you sue over a bad review?

In the realm of defamation, there are laws that protect against interfering with business relationships, and against malicious and false statements among other things. In Tom’s case, the Hospital argued that the review was false and malicious. Tom told CBS News that he was over 26,000 in debt fighting the lawsuit.

How is the FTC involved?

Companies attempted to protect themselves from negative reviews by putting clauses in their service agreements, and in the case of hotels, their rental agreements, to prevent individuals from publishing negative reviews. In response to the attempted contractural silencing of customers, the FTC passed the  Consumer Review Fairness Act. According to the FTC the Consumer Review Fairness Act “protects a broad variety of honest consumer assessments, including online reviews, social media posts, uploaded photos, videos, etc. And it doesn’t just cover product reviews. It also applies to consumer evaluations of a company’s customer service.”  To do that the act prohibits businesses from putting it in their contract that negative reviews can’t be left, or imposes a penalty or fee for someone who leaves a negative review or requires people to give up their intellectual property rights in the content of their reviews.

What can consumers do?

In an article, I was interviewed by The Points Guy.com for I suggested that consumers keep their reviews honest, dispassionate, and factual. Additionally, attempt to deal directly with an establishment if you have had a negative experience before turning to the internet to vent. I also support a good vent, type it, don’t publish it. At the end of the day relying on the adage “, the truth is an absolute defense”, can still land you tens of thousands if not hundreds of thousands in legal fees, even if you haven’t done anything wrong.  Keep yourself in the best position to not get sued by keeping reviews honest and factual.

For more about this topic the Get Legit Law and Sh!t episode 17 covers this topic.